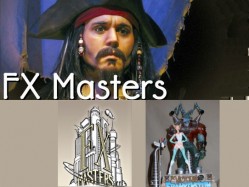 I recently had the opportunity to use an MPK  silicone on a job  for the Fox pilot “Sons of Anarchy”. My company, FX Masters, was brought on to create a preemie baby rod puppet. As the puppet had to move freely, I plasticized the silicone 30%.

As with any silicone that’s been plasticized, I was anxious about paint and patch  adhesion. We used conventional 100% silicone caulk (found at Lowe’s)  and thinned it as necessary, with naptha, before mixing in our tints. The results were astounding. The paint adhesion was far superior to any silicone I’ve used before. So much so that even after extensive handling, there was no detectable wear.

The seams on the piece, brushed out and blended with naptha, became undetectable, and never showed any signs of separation. After twenty years in the  motion picture special makeup effects business, I unequivocally believe that this is the best skin material I have ever used. I thoroughly endorse the mold making silicones that Mike Knott has provided me.